Interior photography often has many more complications than just composition and lighting. One of the biggest issues facing a photographer of a commercial interior space is the use of the space. Who will be occupying the space and will they be receptive to a photographer and assistant setting up cameras and lights while people are trying to work?

In the case of the Toronto offices of Zurich Insurance Canada, they had several floors of a major downtown building redone for their new Canadian head office. With the expense of the build out and the associated costs of moving all of their people and equipment, they wanted to get back to work ASAP!

In this case we were very fortunate. Turner Construction, the General Contractor on the project, had a very good relationship with the people at Zurich and we were allowed to come in late in the afternoon (after business hours) and photograph their interior space. I would have liked to schedule the photography to take advantage of the spectacular views afforded by this building in Toronto’s financial district, but an architectural photographers responsibility is to make the best of whatever situation presents itself. I always keep in mind that we are in the space at the sole discretion of the people working there. 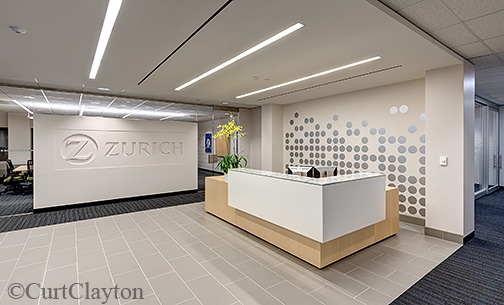